With Throw n, James Wagner and Bracha L. Ettinger has created  an effective example of one of my favorite types of ekphrasis: the specificity allowed by text stemming from abstract visual work.

Of course, it matters that Wagner was writing poems to evocative, lyrical, beautifully mysterious (and I can continue throwing out the compliments but, Reader, I trust you get the drift of my praise for the) paintings.  But while I call Ettinger’s paintings “abstract,” they also remind me of what several wise artists have said—there’s really no difference between figurative and abstract.  Here’s an example I chose because its title, “NO TITLE YET,” does not offer a narrative reference in the way some of the other paintings are titled (e.g. “EURYDICE” or “DEMETER PERSEPHONE”): 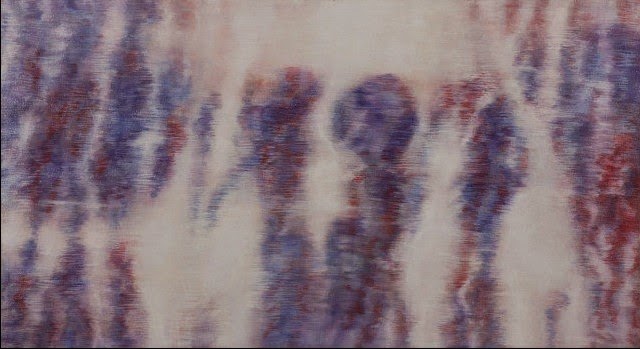 From the above image, Wagner surfaces such references as “innards,” “hooligans,” and “torso”—an imaginative riff from the visual.  Such isn’t enough, though, to create an effective poem and Wagner writes and/or strings together the words with imaginative intensity and a matching mystery that makes the poem stand on its own:

Swam and answered with innards:
The hooligans
the night’s inside.

By implication: remember him
red and waving,
her knees near the thieves,

A torso
will hope
you forward.

That last tercet is one of many within the poem that manifests a response going beyond the expected.  As such, it befits what I read, too, to be the theme in the title “Throw    n” with that caesura between “w” and “n.”  The painting throws out a gesture calling for response.  The poem responds by, yes, catching the throw but also not impeding the throw’s trajectory to continue forward the alchemized interaction between visual and word.

Even when the poem shows some relationship to the title of the painting, Wagner still creates something unexpected which, when combined with his lyrical prowess, refreshes anew this type of ekphrasis.  For example—and apologies for my crappy Iphone photo—here’s Ettinger’s painting, “Eurydice nu descrendait”: 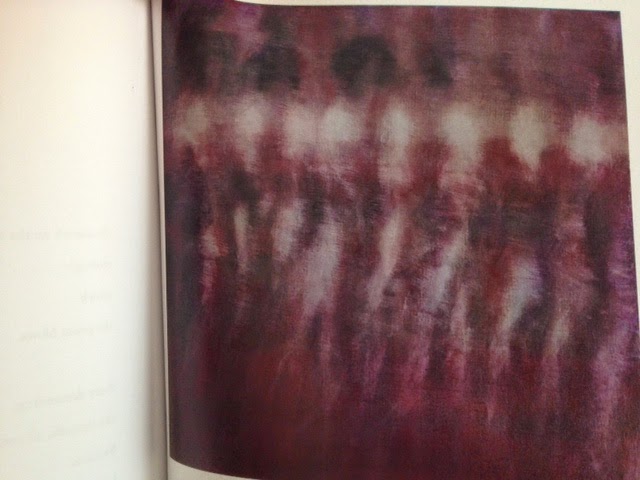 Here’s an excerpt from Wagner’s poem-response:

Each level of heads
summons a new
stumbling
up from the underworld.

Enigma, sequence.
Roses motioning
the fear face there
in the illuminated

dresses.  Going,
gone. Love of
someone once
was here.

There are many such brain-yum moments ("The words form only / from air, in the / lights, sending / it all to the teeth") throughout Wagner’s poems, fitting as such were warranted by Ettinger’s lovely paintings.

Moreover, this book is respectably more ambitious than many poetry books.  While each "section" (my term, not necessarily the author's) can be an individual poem, all of the sections also combine into a single book-length poem.  That each section or grouping of poems is written to a painting implies that this particular book was written with paintings as the scaffold for continuing its unfolding.  Bow. Wagner thus created a whole--intuited a relationship--from paintings that also are individuals and separate from each other.

This book is worth pursuing for your own visual and mental relish.

Eileen Tabios reveals something about herself in ARDUITY'S interview about what's hard about her poetry.  Her just-released poetry collection, SUN STIGMATA (Sculpture Poems), received a review by Amazon Hall of Famer reviewer Grady Harp.  Due out in 2015 will be her second "Collected Poems" project; while her first THE THORN ROSARY was focused on the prose poem form, her forthcoming INVEN(S)TORY will focus on the list or catalog poem form.  More information at http://eileenrtabios.com