NICO VASSILAKIS: LANGUAGE AS THE STRUCTURE OF BEING
By Tom Hibbard 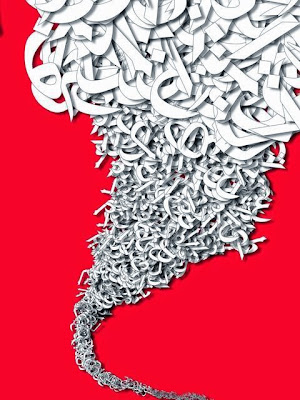 In the beginning was abstraction, the search for the common characteristics of the logos of Being, transposed from the mincing obscurity of the Law into the revitalizing jouissance of visibility.  Sartre writes that existence is consciousness of consciousness. Fiction is the truth; the objective world is the lie.  To the clarity and weightiness of the Quantum description of the universe, Max Planck, in deep humility, applied the term “miraculous.”(1)  Niels Bohr confirmed the birth of a new positivity in observing that “the very foundation of a deterministic description has disappeared.”(2)  And it remained for Einstein to show that, in the cavernous empty unknown of Creation,  time itself is ambiguous and subjective.  These theories with their many implications and manifestations, derived “face to face with the mystery of our own beings,” dealt a mortal and decisive blow to intimidation and death.

Today the struggle continues, with an avant-garde that, believing itself to be standing on the bedrock of Creation, is prepared to outline an ontological reflexive picture of life as it will be in the future and forever.  Like the sharp-edged protractor-and-compass formulations of Wassily Kandinsky, the language-artifact compositions of “visual poets,” of “Vispo” boldly yet sometimes lightly impose, with full awareness and vivid remembrance of the desolating holocausts of iconic absolutism, a mathematical or conceptual set of requirements that draw the non-linear borders of “healthy” and vibrant societies and communities.  Rather than subjection, these artists postulate responsibility.  Rather than obedience, they enforce imagination.  Rather than eliminating diversity, they encourage and protect it.  Space and spacing, distance and remoteness, ambiguity, the self, that is, interiority, breach and entry, infinity, consciousness, historicity, perspective, lack of pollution, sadness, heroism, reversibility, interaction, motion and “prosperity,” utility, originality, equality, “the truth itself.”  All of these are qualities and characteristics that have been identified by various Structurist writers and others as qualities and characteristics associated with language.  Saying this is saying more than that these qualities need to be invented.  It is saying that these qualities, like human rights, are inherent in the conceptuality of all creation and inviolable and provide the measure of exteriority.

Recently, the work of Nico Vassilakis, like that of several other visual artists, including Hungarian Marton Koppany and American John Bennett, has begun experimentation and use of digital technology.  Though the digital image might be used as a symbol of this bedrock of Creation, the new stage of exteriority in which we are able to identify and recognize the global features of the human community is quite different from technological advancements—of which the history of civilization has seen many.   I grant that the more exact delineation of the digital image might in fact represent a “disambiguation” of the terms and vantages from which we view society at this point, but, as Emmanuel Levinas, Planck and others seem to argue, the logos of language and the structure of Being will always remain based on uncertainty, ambiguity, subjectivity, multiplicity and mystery.  As Levinas suggests in Totality and Infinity, the end of language is infinity rather than finality.

A relation between terms that resist totalization, that absolve themselves from the relation or that specify it, is possible only as language.(4)

Negation is present—nothingness and accusation.  Levinas speaks of “the resistance of one term to another” and of “the hostile residue of alterity.”  However negation, even negation that arises out of “a wall of positivity,” is transcended in the immensity of the in-itself.  Levinas calls this immensity “the consciousness that spoils happiness.”  And Sartre writes that the source of negation is “human expectation,” which turns the in-itself into the for-itself.  Sartre writes further that “Being-in-itself is full positivity and does not contain in itself any negation.”(5)  The point is that the hostility of non-being arises out of the faux-Other, that is, appearance, and, on the other hand, the problematic of the Other is, via language, in actuality the source of interaction and Being and not the source of negation.  The authentic Other is characterized by what Levinas terms “miraculous abundance” in the “ever recommenced effort of language to clarify its own manifestation.”  Thus the Other is the source not of negation but of life. 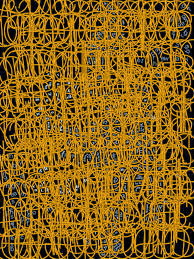 Roland Barthes, in The Pleasure of the Text, describes it even more radically in saying

It is a matter of effecting by transmutation (and no longer only by transformation) a new philosophic state of the language substance; this extraordinary state, this incandescent metal, outside origin and outside communication, then becomes language, and not a language, whether disconnected, mimed, mocked.(6)

Concerning Barthes’ renunciation of origin and communication, my sense is that not only should visual writing, like every artwork, be distinguished in originality but it should also contain originary facets and features.  One of the first and most persistent sources of visual writing is ancient languages.  Without meaning why bother with language?  Visual poetry undoubtedly deserves a place among the first fruits of language, and its purview is changing and growing.  But visual writing is also a middle state that bears witness to the importance of articulation and content.  Modern language use has moved toward ecstasy, spontaneity and poetry, but the wider application of Levinas’ speculation is that any dissociation of language from communication, relation, truth, meaning, signification, origin would be, because of the loss of “resistance to totalization,” a demise rather than a fulfillment, a silence rather than a conversation. Just as with Werner Heisenberg quantum science must shed light on both the most complex and the most simple phenomena, with poetic language there must remain some form of accountability toward the most direct linguistic situations.

Born in New York City and having spent much time in the Seattle area, Nico Vassilakis is both a textual and a visual writer.  Among his many and various publications are Asemic Fallacies, American Fossil, Diptychs (Otoliths) and The Last Vispo Anthology:  Visual Poetry from 1998-2008 (Fontagraphics) co-edited with Crag Hill.  In a recent interview published in Body online journal, Vassilakis commented about visual writing

Vispo is clearly a response to language. It tends to enhance the quantum aspects of language by focusing on the elemental design parts of language material.
And

Though language is used as the common platform for communication, it’s prone to being creatively finessed in any number of ways.

In the first work above, Babel Letters, the immaculate digital quality of the image against a red background enhances the fundamental forlorn isolation of an heroic and spectacular tornadic cloud of letters. In recent works such as Manifesto, Vassilakis asserts a commitment to digital processes.  But his earlier work, some of which consisted of Xeroxed pages upon pages of typewritten characters, and  his excellent 2007 color collection Diptychs convey a deeper emotional indeterminacy.  In Diptychs the blurred, bright-colored cell-like images have surface qualities clearly related to biology.  In a long textual poem at his current website, Vassilakis writes 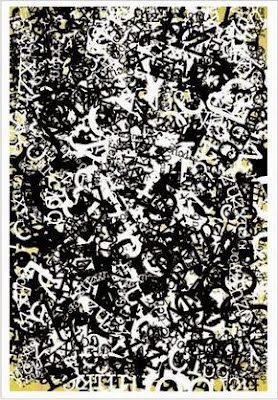 It seems that these Structurist qualities and metaphysical structures “inside the word” are the nexus of visual poetry.  Having been side by side with humankind since the start of civilization, language has become so familiar in its many uses and functions that we begin to explore a wide range of connotative meanings.  I think this is what Vassilakis is referring to in saying that “Vispo is a byproduct of one’s experience with literature.”  Vispo consists of Proustian associations from handling, purchasing, treasuring, reading books and written material during a period of time.  Karl Kempton defines a visual poem “simply as a poem composed or designed to be consciously seen.”(7)  Of Vassilakis work, Geoff Huth writes in the introduction to Diptychs

Nico is tearing away the signification of the characters, atomizing the words….In some cases, all that remains are half-obscured spoors of a text we will never again see….And the patterns built up through the sequences of poems create expectations within us.  In this way we learn to read a language we do not know, a language that will never exist.(8)

This is metalanguage, a language of an entirely conceptual past that both Derrida and Levinas associate with the trace.  In one of Vispo’s immediate forbearers, Concrete Poetry, poems are written on a page in the form of geometric shapes, such as a heart or a cross.  In these types of artworks, the word “concrete” in my view references a physical substantiveness and natural strength derived from words and letters themselves.  Visual writing, visual poetry evolved partly from Concrete Poetry.  But here a disambiguation would be welcomed.  The many and increasing number of forms that visual writing exhibits, especially with its introduction of color, would be misleadingly classified under the term “concrete.”  In early visual works, words took the place of bricks forming walls or edifices.  As it has progressed, visual work has discovered a different sort of paradigm.  Huth in his Diptychs introduction uses the word “shimmer.”  Indeed, the term “visual” for this work is itself misleading, since an intact visual image of a face or an animal would not be visual poetry (except of a certain type).  Vispo is an interrogation of the unique sign of the cursive mark of human or divine history.  Karl Young rightly calls the term visual writing “ad-hoc.”  It is the expression of a wound or regret as we recognize it in the context of knowledge.  Because of this and because of the affinity of language with wide and global perspectives, Vispo may have much to do with ecology.  In a way, it is the poetry of absence and is often associated with the term “asemic” rather than the term “semic.”  For example, In some of his writing about visual poetry, David-Baptiste Chirot uses the phrase “breaths of ghosts” and the idea of anonymity.  In any case, Vispo remains undefined in great measure, which is only an indication of the creative and philosophic work in this field that has yet to be done.